How did he do that you ask? By giving me back my Non Smoker life!

Flash back 24 years ago; One day at work I had a conversation with a co-worker. She told me about how her and her chain smoking husband both quit smoking by using hypnosis. I was intrigued and had asked how it was. She had said it was very relaxing and they never smoked again. I filed that conversation away for the day I would need it. For a day I was ready to quit smoking. She had mentioned that was important.

A few years later, Hubby and I had cleaned, and painted all the rooms in our one story home. After seeing the disgusting yellow nicotine on the ceilings we made a deal with each other. We were only going to smoke outside. That was in the summer. Winter came and I was tired of smoking outside, so I had narrowed myself down to only smoking a few cigarettes in the evenings. By then I was only smoking on my way to and from work and quite frankly, tired of it. It was annoying.

I was tired of smelling like smoke, tired of paying through the nose for a pack of cigarettes--which at that time were $3.00/pk - yep, I said paying through the nose LOL-- tired of worrying if I have my lighter and cigarettes on me when I left the house, yada yada. . . I'm sure anyone reading this that's been/is a smoker knows what I am talking about? Well, quitting is easier said than done. Try asking a habitual coffee drinker to give it up for a day/week, and see if you get punched in the face. Just kidding! Don't do that! Caffeine is actually a drug and you have to ween yourself off of it. Turns out, you don't have to with nicotine. It's just a BAD habit that I allowed myself to get hooked on.

But I digress. I had a medical issue and had to make some changes in my life. One of them was cigarettes. Trying to quit cold turkey was like sticking my finger in an electrical outlet and trying to feel better. I was edgy, and driving everyone up a wall because the one thing I usually did to calm my nerves was smoke. I started smoking again to save my marriage--still married by the way. ;-)

Well, that following spring I saw an ad in the newspaper: "Stop Smoking & Lose Weight with Hypnosis" or something like that. I didn't save the ad. But it jogged my memory of talking with that co-worker that day at work. I wrote down the info in the ad, and talked to Hubby about it that evening. Of course he looked at me like I had two heads. Okay, it was more like three heads. I was pumped, he was like "whatever", and I saved the date.

You didn't have to sign up, just show up, sign in, and pay $50 for the seminar that lasted maybe an hour and a half. I know what you're thinking. You're thinking (If you smoke) that's money I could have used for smokes. Well, that was my point. I'd SAVE money after that day. That co-worker I mentioned had taken all the money her, and her husband would have used to buy smokes, put it away, and paid off a loan, and took one heck of a vacation the following year!

The night of the seminar I gave Hubby my pack of smokes and grabbed seven cigarettes to take with me.Then I thought better of it, and I grabbed three more. After all, it was a 12 minute ride to the seminar, and I was leaving a half hour early. Hubby told me they'd be there when I got back home. Such a critic. I smoked every single one of those cigarettes in 30 minutes. In fact I wasn't the only crazy one in the parking lot chain smoking like a fiend waiting for the seminar to start. There were others there for the weight loss portion too but most of us were smokers.

Talk about an interesting seminar! I was introduced to the simple process, and how if we tap into our subconscious we can rule the world. Well, at least our worlds. I was amazed at how easy and relaxing it was. I felt free for the first time in a long time. If you've never been to a hypnosis session, I suggest taking a pillow with you. It'll be more relaxing if you do. :-) After the seminar we could purchase cassette tapes for hypnosis. It takes 21 days to create a new habit. I know, I'm showing my age here with the mentioning of the cassette tape--for those of you unfamiliar with cassette tapes, they're the ribbon form of cd's/mp3s. I purchased the tape for the non-smoking. It came in handy to remain on track each day.

Hubby didn't go to the class with me. He thought it was hokey, and I needed back up for living with a smoker. I walked out of that seminar a Non-Smoker! And I haven't picked one up since I chain smoked a half a pack of cigs in 30 minutes that night. Oh, and the other half pack of cigarettes were till waiting for me when I got home. Hubby handed them to me with a lit cigarette in his hand, and I didn't take them. I told him to keep them. How's that for self control! And, even though Hubby thought I'd start smoking again, he's proud of me! :-)

So, in summation, I did not QUIT Smoking I just became a non-smoker. Using that term, made it easier to deal with. Dave had mentioned that it was ingrained in us growing up that "quitting" was considered a negative thing. No body likes to be called a Quitter. That was all part of the hypnosis process. It quiets our conscious brain to help us focus on the good things we're trying to accomplish.

I owe a debt of gratitude to Dave Miller, he saved my life that day. I had recently went looking for his CD's because I had friend who wanted to quit smoking and I thought of Dave immediately. Sadly, I found out a few years ago he lost his life while swimming in Lake Erie. Such a tragedy to lose a man who lived to help others reclaim their health. :-(

I had worked through my smoking demons through hypnosis. Watching a few people in my life try to work through their own smoking habits with a prescribed medication, led me to a story that took on a life of it's own. Dangerous Ledges is now available (buy links below). I hope you get a chance to read it. And, if you're still smoking, I hope you find a healthier choice to free yourself from those chains. I can't find a link to Dave's store any more, but maybe you can get in contact with Dave's wife at the link below to see if she has some cd's still available for sale? I also posted his Youtube link too, as the videos might help explain a bit about how it works.

Hold the memories close, and each other closer.

Hugs & Prayers to you all.

M K Farrer--Make Them Pay Let the Count down begin! I just read one of the many short stories included in this anthology. System Failure –... 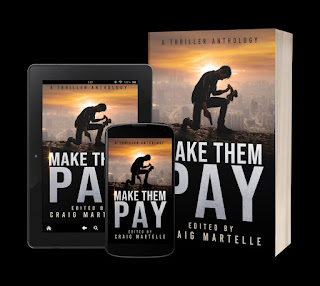 Fallon Raynes
Fallon Raynes is a paper pusher by day, writer by night. Writing has been in Fallon's blood for as long as she can remember. Short stories and poems kept her mind at ease earlier on. Life's adventures have swirled in her mind to create some exaggerated stories that she's excited to put to paper and share with the world. To relax, Fallon enjoys watching the ID and Hallmark channels, reading, and the outdoors. Fallon resides in lower Michigan with her husband and fur-baby.