Excitement is in the air. 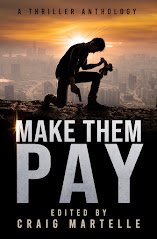 I have this awesome thing to share with you all. There is an action thriller anthology that is coming to a kindle near you Monday, March 15, 2021! I am Honored to be included in this great round up of thriller authors. Go click the link below to pre-order Make Them Pay--A Thriller Anthology. You do not want to miss this!

**Available in KU, kindle and it will be in paperback soon.

When criminals cross the line, who will make them pay?

From police to vigilantes to secret government organizations, the answer awaits those who think they are beyond the reach of the law-abiding world. They make their own rules.

For that, we must make them pay!

More than twenty thriller authors bring their ‘A’ game with never-before-seen stories, different takes on justice, and maybe that’s the way we want it to be.

Loathsome Justice – M.A. Comley – The game is up!

The First Hit – Craig Martelle – They say the first is the hardest.

An Inside Job – Ian W. Sainsbury – A Bedlam Boy Story

System Failure – M.K. Farrar – When the system fails, only murder will put it right.

The Ninth Man – Jeff Shelby – A man with a reputation for being able to find anyone joins forces with a woman seeking to avenge her daughter’s death.

Cross Your Heart – G.K. Parks – Who will survive when a private investigator’s good deed places him on a collision course with a Russian gangster?

Rats – J.R. Pomerantz – Ravi’s rat problem is about to blow up.

The Silent One – Jack Probyn – Contract killing’s hard. Especially when the next name on your list is your father’s.

Super Something – John Hindmarsh – Penny was on a mission of revenge and retribution. Russian agents had similar objectives. She was a super recognizer; one of the Russians was the Poisoner. Penny wanted to win.

A Dance with Death – Drew Avera – How do you stop a killer when he’s one of your own?

The Last Assignment – Douglas Dorow – The last assignment for a Military Working Dog Handler and his four-legged partner is more than just another day in the field.

Getting the Wind – Stephen Couch – A man delivering meals to shut-ins finds himself, and his elderly client, caught in a drug war.

Straight Flight – Arleigh Jacobs – When a girl is kidnapped, Colt has one path: Get her back.

The Package – N Gray – All I had to do was hand over the package. What could go wrong?

Hunting Darkness – A. K. Hughey – Death waits for those who dare to stop the traffickers.

Temptress – Fallon Raynes – When local bars become the hot target for thieves, Detective Reyes is reminded that temptation comes in many forms.

Lane Departure – Tom Fowler – John Tyler thought he stumbled into a robbery. If only it were so simple…

Death and Dollars – Jonathan Shipperley – Coast Guard Special Agents Frank Dalton and Jessica Carter pick up the trail of “El Doctor,” a notorious cartel capo wanted for an attack on a U.S. Embassy, but Dalton wants him for his own reasons.

No Reason – Steve Davison – When a hostage exchange goes wrong, special field operative Louis Cane is forced to take matters into his own hands.

Please welcome my guest Leah Cupps.     Question: What are the best and worst things about being a writer?  The best thing about being a...

Fallon Raynes
Fallon Raynes is a paper pusher by day, writer by night. Writing has been in Fallon's blood for as long as she can remember. Short stories and poems kept her mind at ease earlier on. Life's adventures have swirled in her mind to create some exaggerated stories that she's excited to put to paper and share with the world. To relax, Fallon enjoys watching the ID and Hallmark channels, reading, and the outdoors. Fallon resides in lower Michigan with her husband and fur-baby.